One thing I wanted to do was wield my Crown Graphic the way it was intended, hand held with a massive flash on the side. 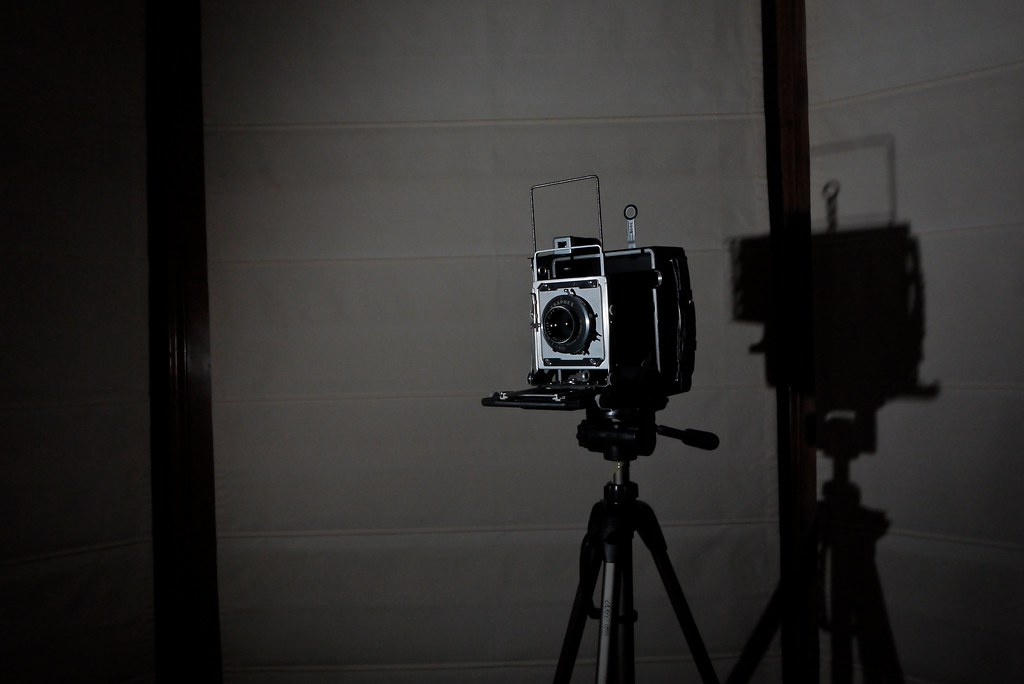 But there were a couple of problems: (A) I didn’t have a flash that fitted it and (B) the rangefinder is all messed up and the process to fix it looked too difficult from the badly written instructions I found at the time. 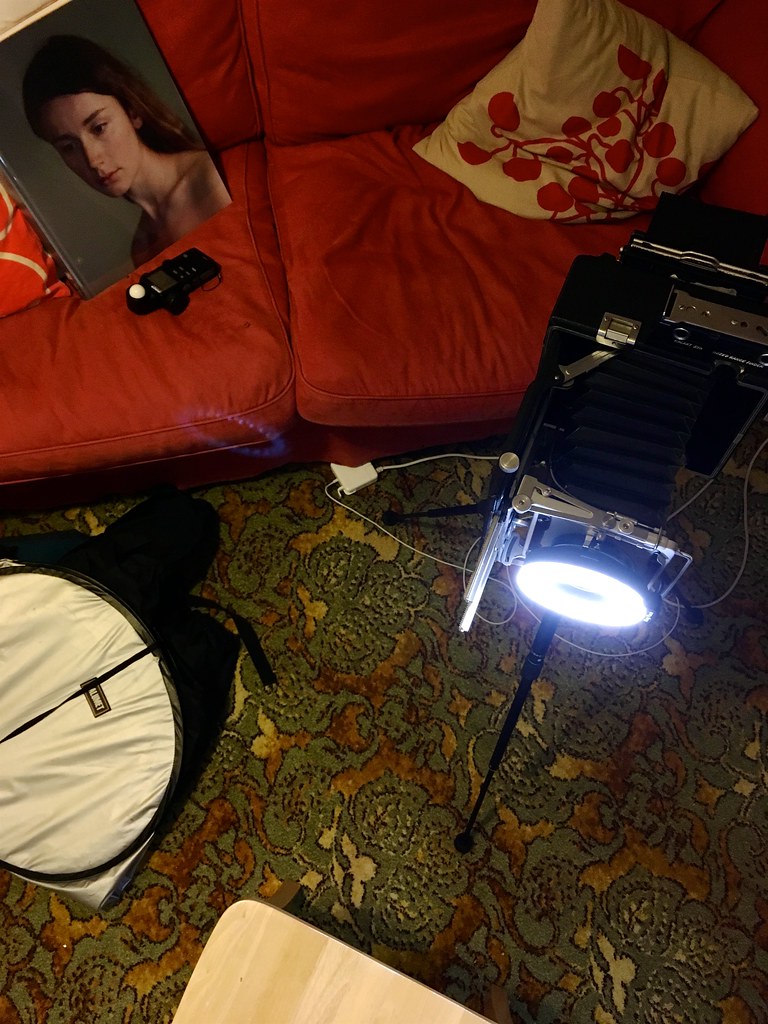 Fortunately the shutter on this Crown Graphic can flip between manual (the bulbs!) and X for modern flashes, I’ve also used viewfinder cameras in the past and it’s not too hard to get close approximations of distance especially with practice … 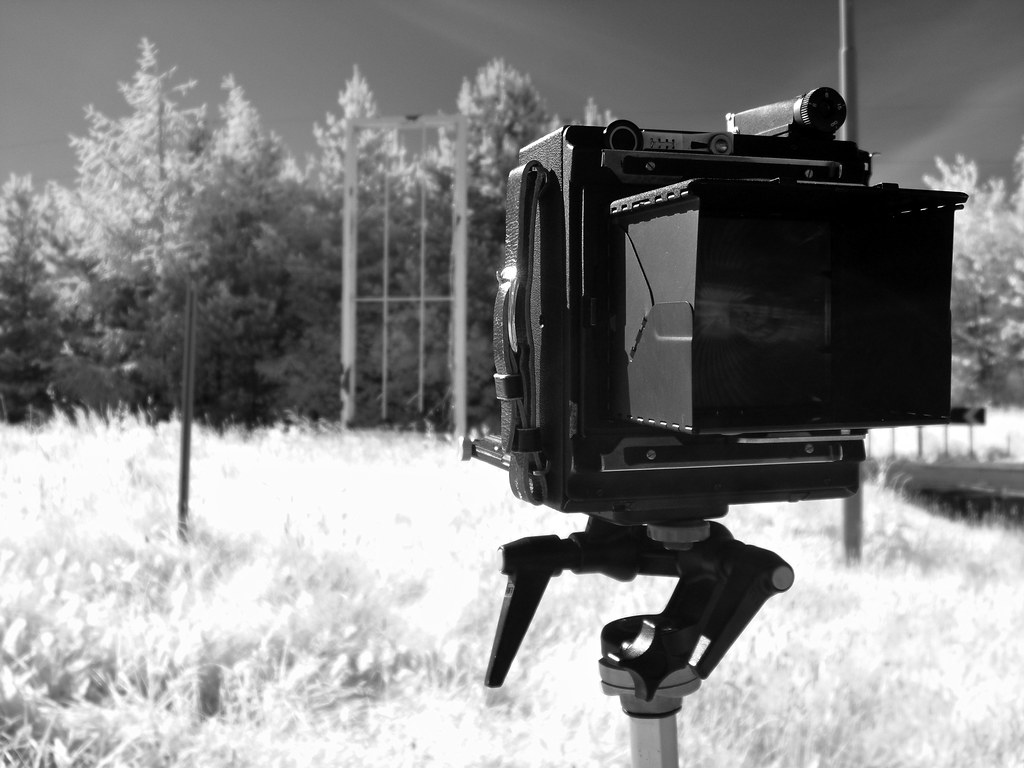 Flash Sync
I’ve already blogged about this in a post at the end of last year but I’ll quickly revisit how simple it is to connect a regular PC cable to the dual pin system the standard Crown Graphic lens/shutter and I believe it’s the same for Speed Graphic cameras.

The 2 pins sticking out on the right of the shutter/lens is the flash conenctors and below them is the switch for the M and X flash-sync modes.

The cable you need to build is pretty simple, you will need to connect 2 cables from each pin and join them to the 2 cables at the core of a standard camera PC cable once you strip it a little and join the 2 cable types together. I used a standard non-fused terminal block to join them but twisting them together then binding them with electrical tape would be more elegant; the cables are small and fiddly though so be warned big handed people.

Finally you will need to terminate the Crown Graphic end with something metal that can grip the pins.

You will likely need a crimping tool to add a terminator for the pins, maybe a Microfit 3.0 terminal would suffice, but I haven’t tried using that connector as I was lucky that James gave me a ready cut and terminated cable (and I don’t know what the metal clips here are called). 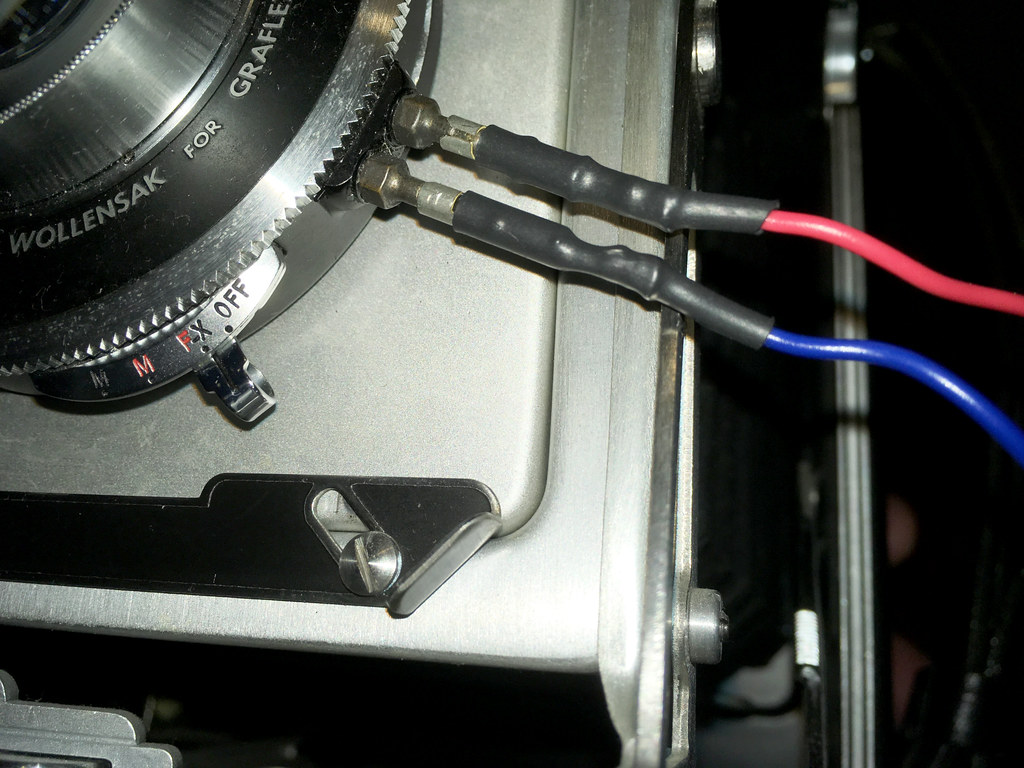 Once you’ve joined the cables to the PC connector and connected your Frankencable to the camera and flash respectively you’ll find it doesn’t matter which way round the cables are connected to the pins.

Flash Mount and Flash
Finding a way to mount a suitable flash to the camera wasn’t that difficult I just searched for a mounting bar on Amazon and there’s a good few options but of course I went for the cheapest at just under £4: “Merssavo Dual Compact Flash Mount Holder“. 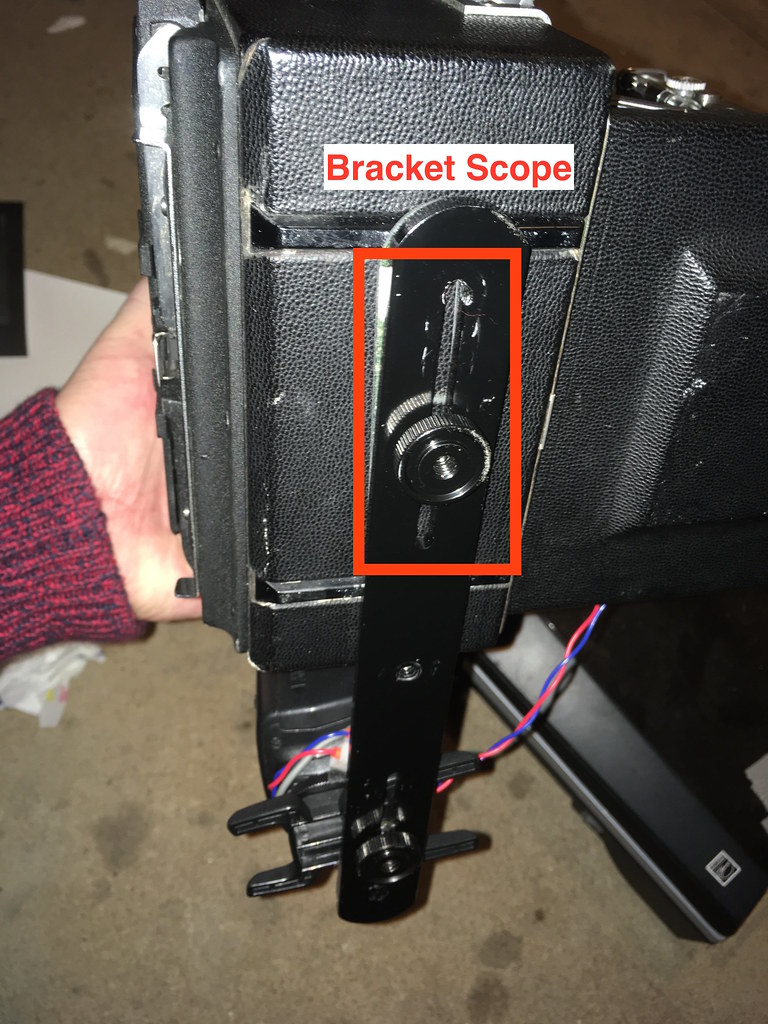 Each side of the bracket has plenty of movement so it was easy to adjust the distance between camera and flash. 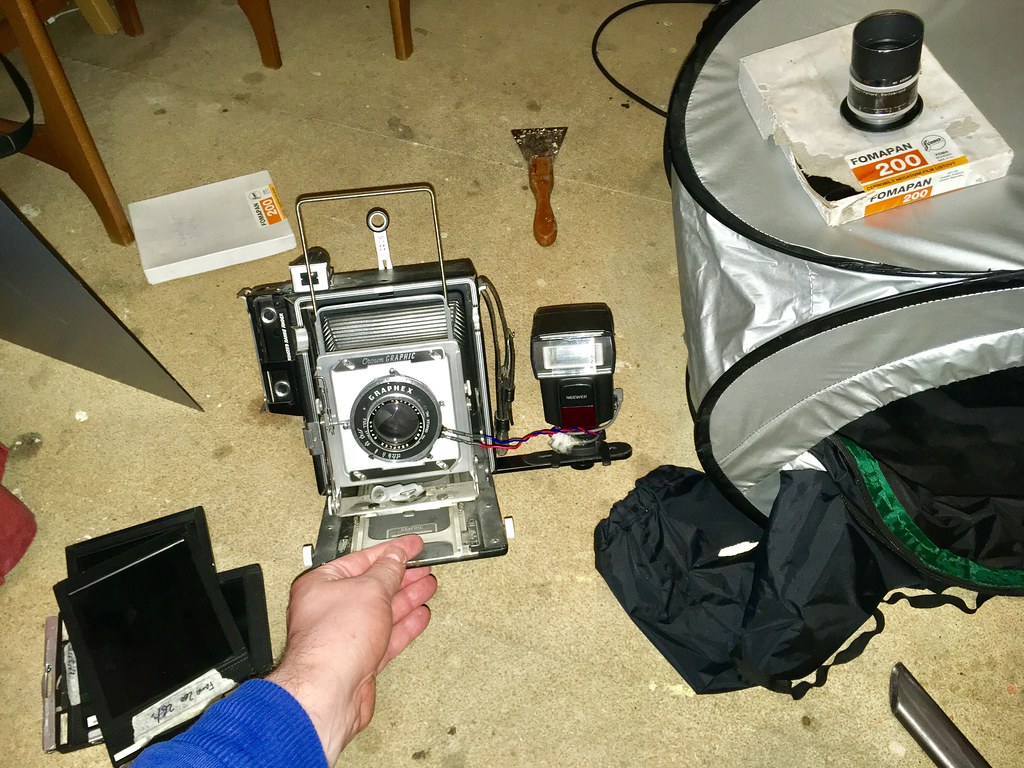 To the untrained eye the flash in the above picture may look expensive but alas you are wrong! It’s a Neewer TT560 that cost roughly £30 and it sports a PC port on its left side, it also comes with it’s own cold shoe stand which has underneath it a standard threaded tripod screw mount. Handy. 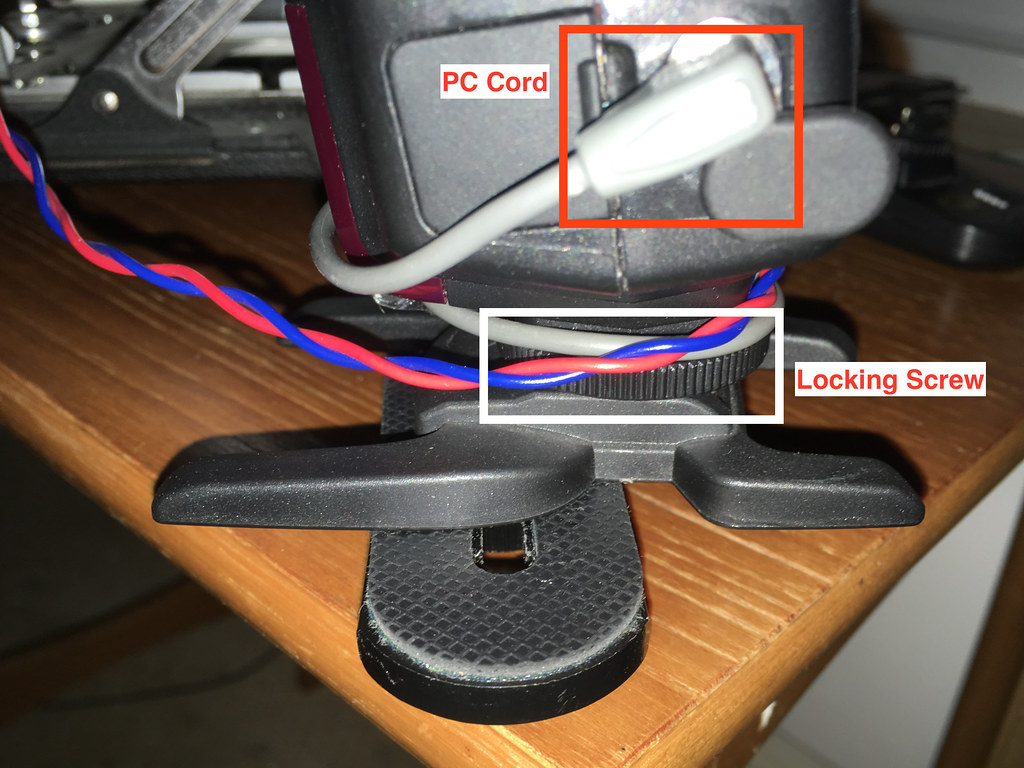 I simply screwed the small stand onto one end of the mount holder (you can see the feet at the base above) then sat the TT560 into the stand, locked it in place with the locking screw and connected up the PC end of the cable.

Focusing
Once the flash was sorted my next issue was using the slightly confusing distance system on the rail since the rangefinder is currently useless. I sloppily did this in conjunction with my Leica’s rangefinder, not super accurate but it felt close enough; simply focus on something 1 meter away with the Leica then do the same with the CG, record and repeat at different distances making sure the focus planes are as close as possible. 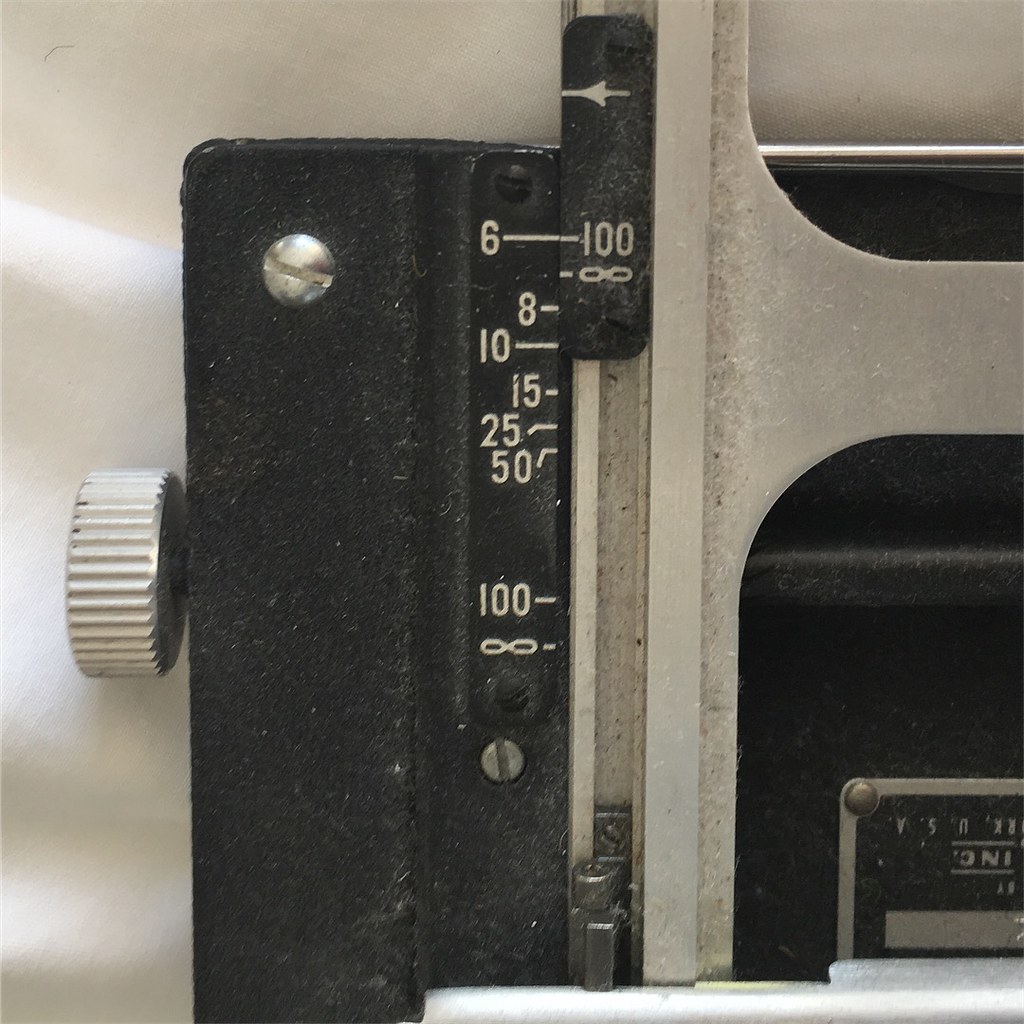 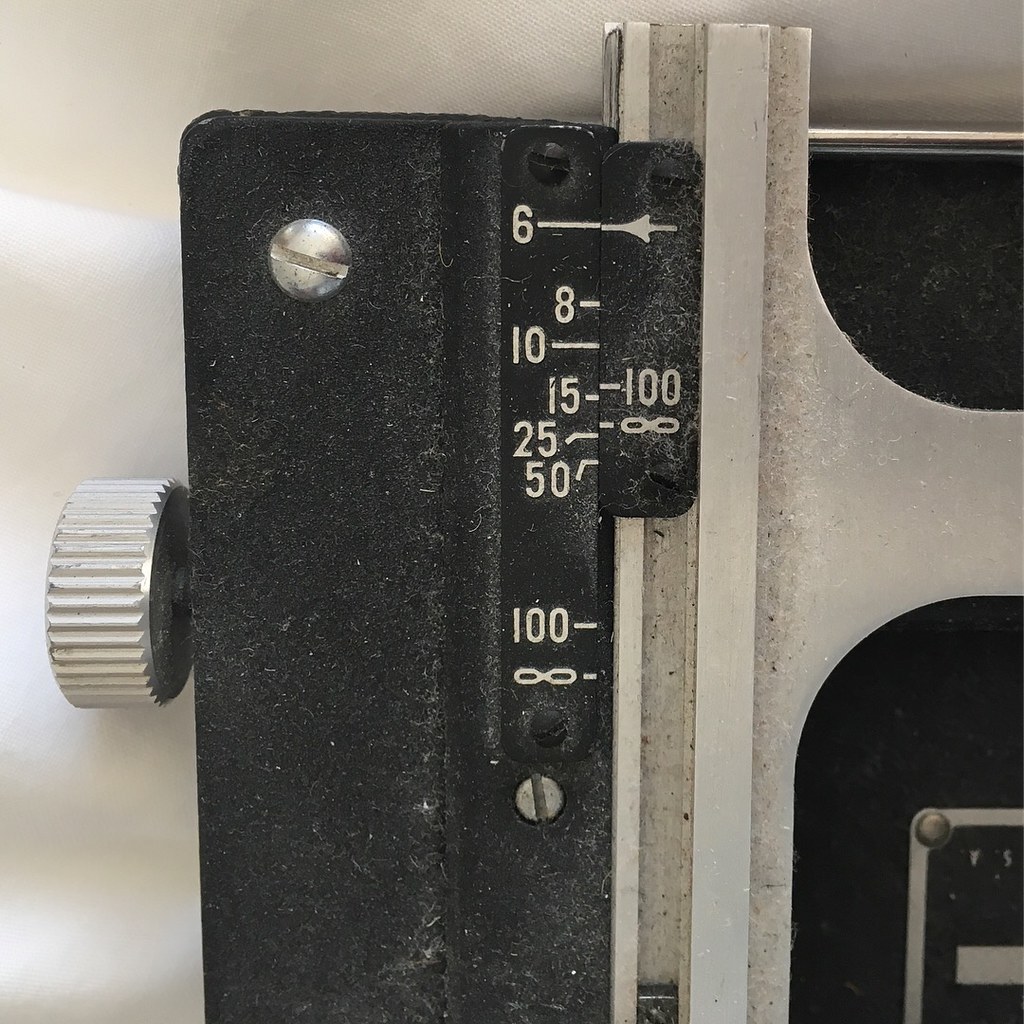 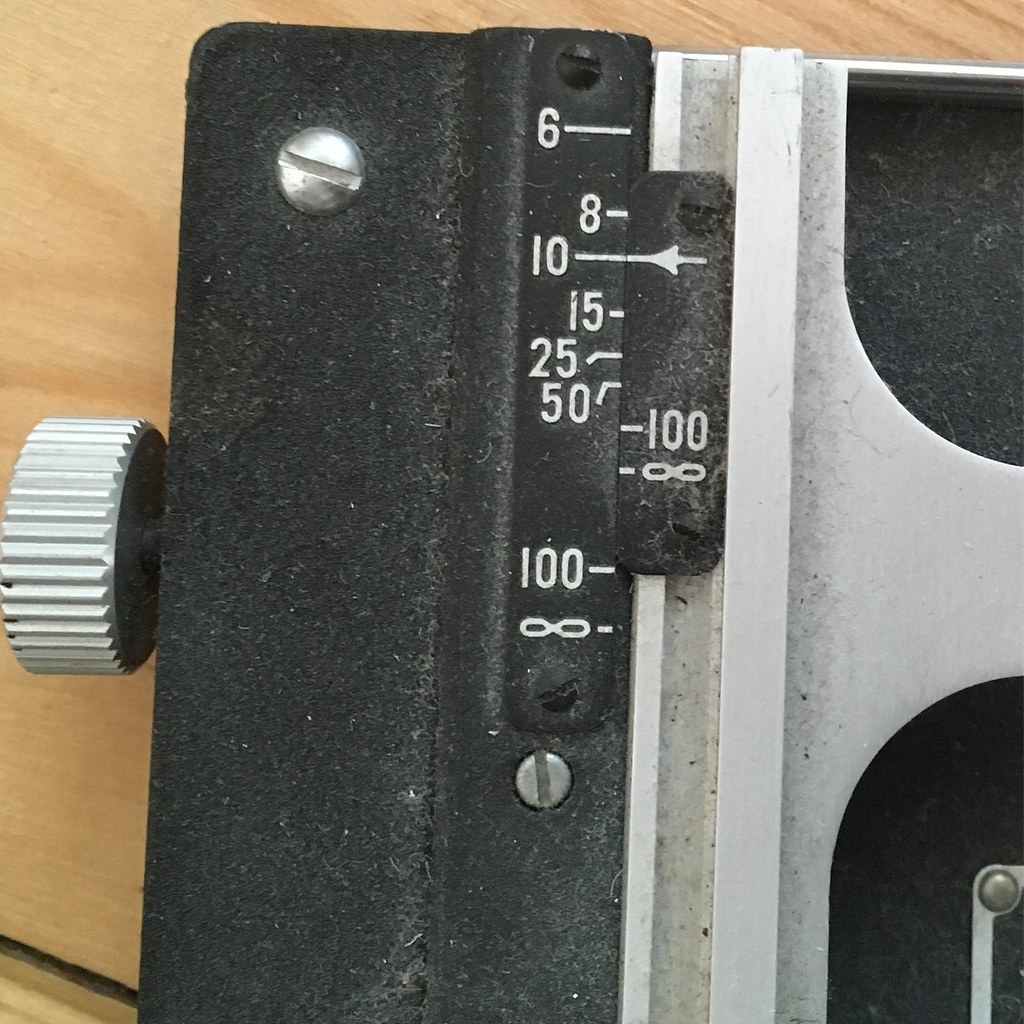 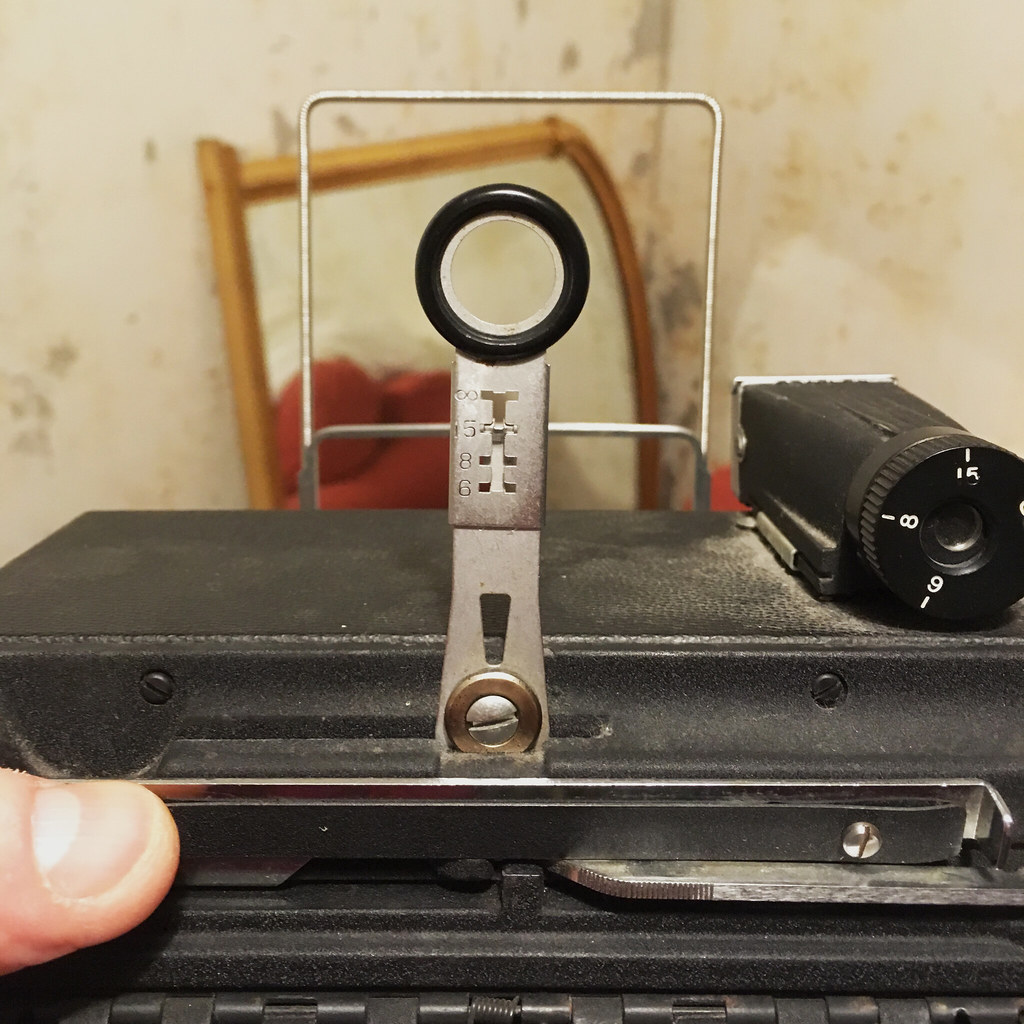 When using this scale with the wireframe viewfinder system on top of the camera you must remember to adjust the rear viewing portal scale (pictured above) according to which focus base number the rail marker is against, see below for clarification: 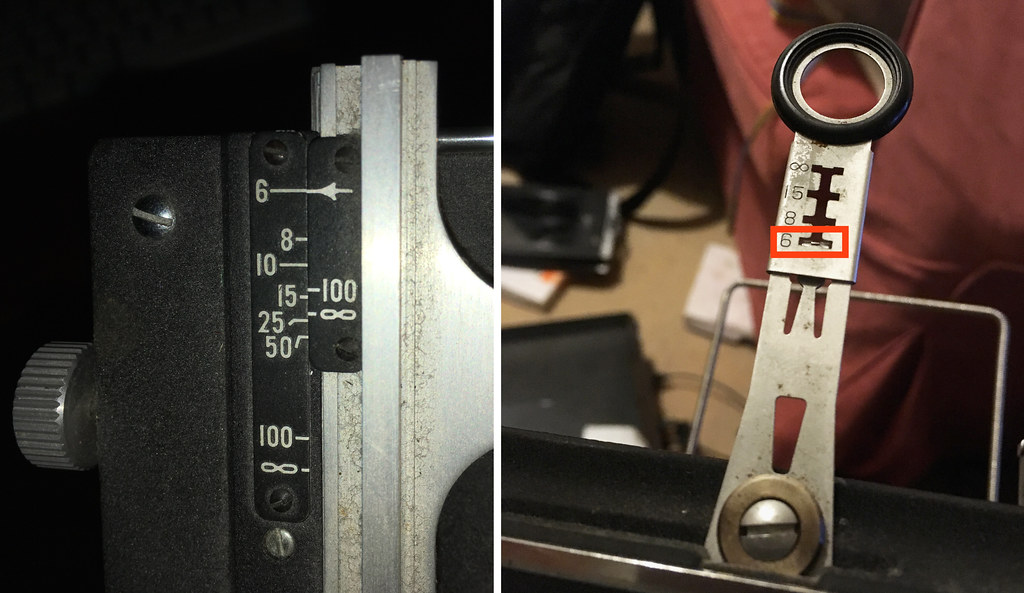 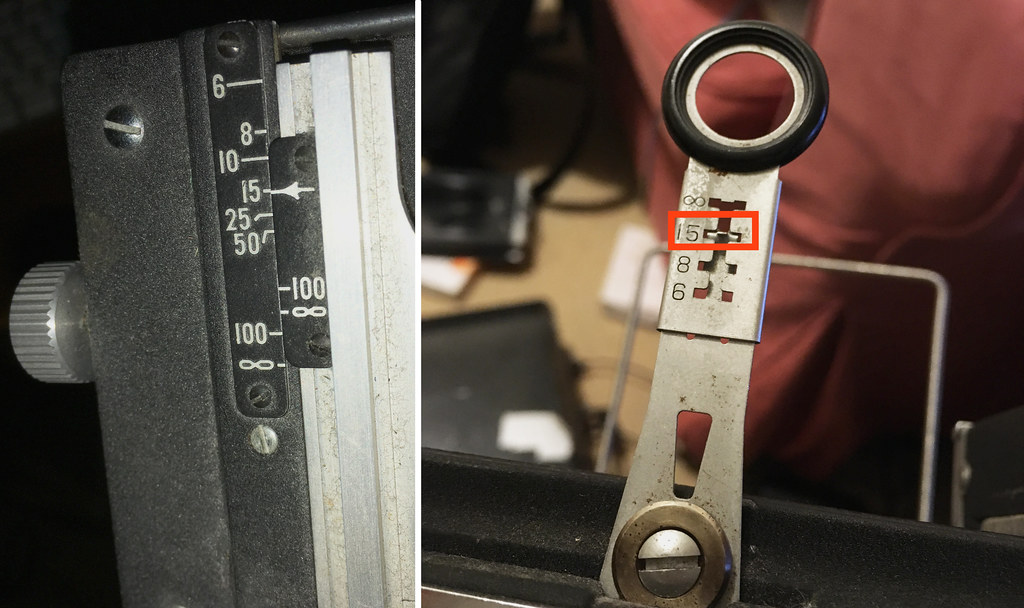 Here’s my reminder of these scales on the ground glass rear viewing guard. 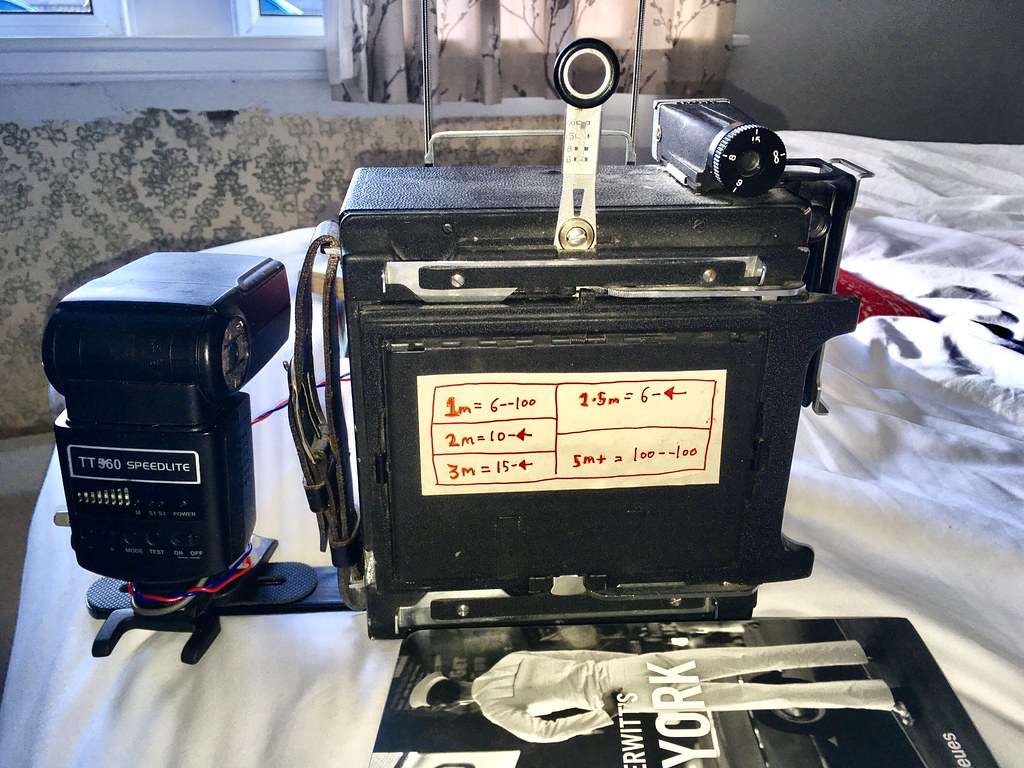 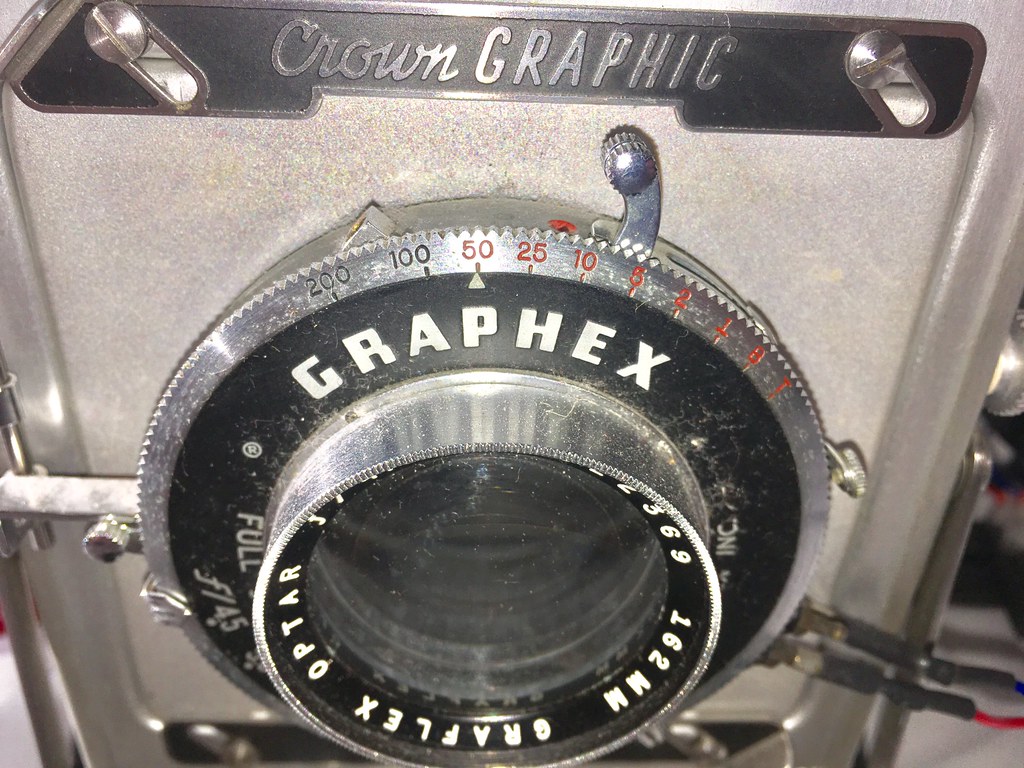 Terrible Tests
Outside is/will be a different situation. My first test was 2 photos indoors then 4 outside at night during Guy Fawkes night – a very stupid idea to be honest – so there will be need to be more outside attempts before I’m satisfied. Here are the results of the first test warts and all: 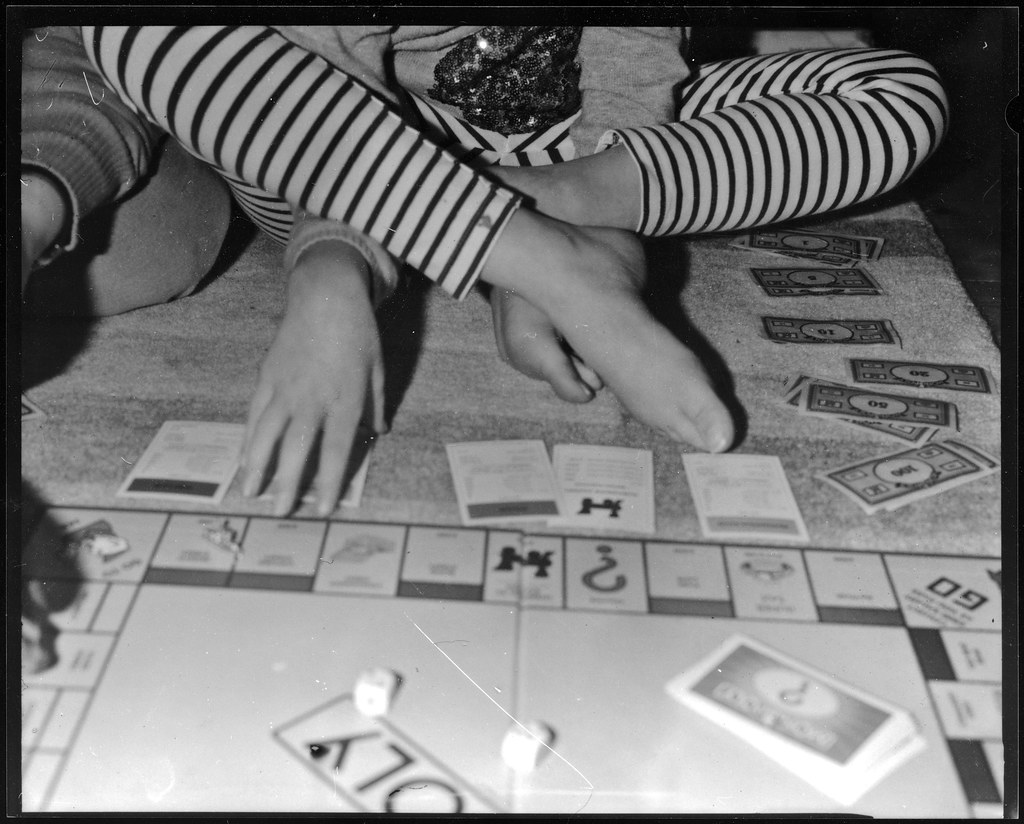 I really think using the rear view port helped correct the lens angle against parallax but of course any closer to the subjects and it would fail but from memory the photo below is quite accurate to what I was seeing. 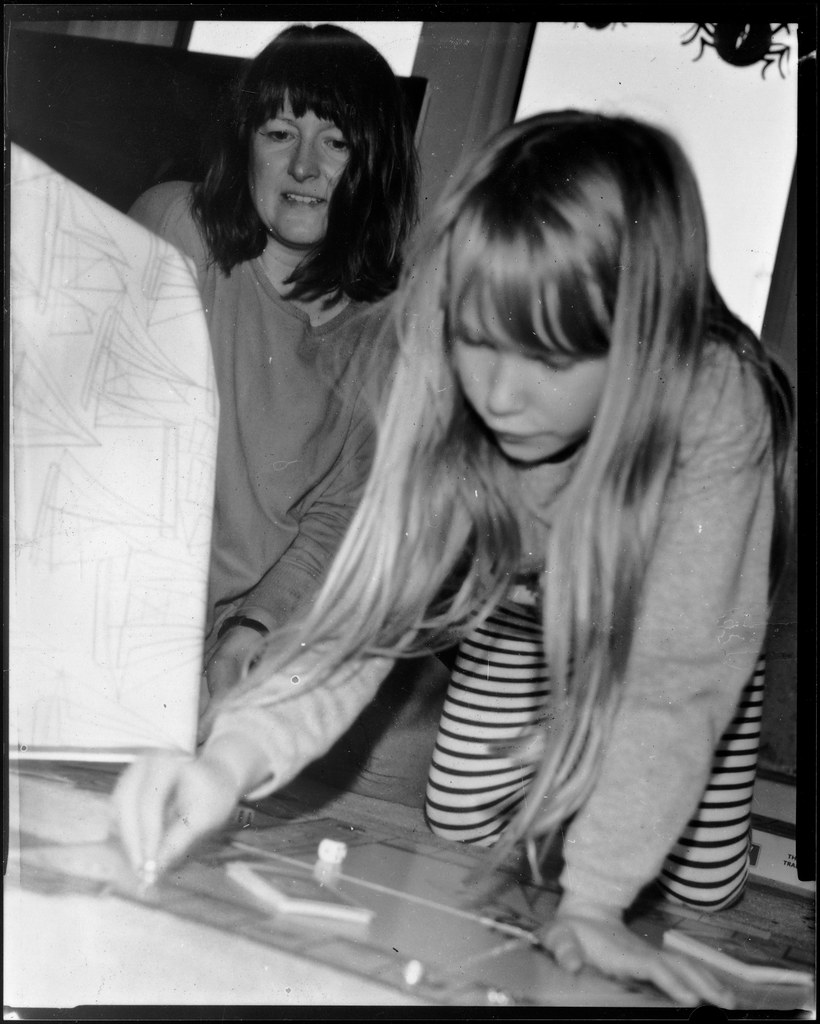 Like I said, shooting at night with this rig using 200 speed film was a very dumb idea because even attempting to accurately read the measurement guide on the back or checking the aperture etc. was harder than expected before you even add the task of trying to capture a moving subject accurately so here lies the evidence: 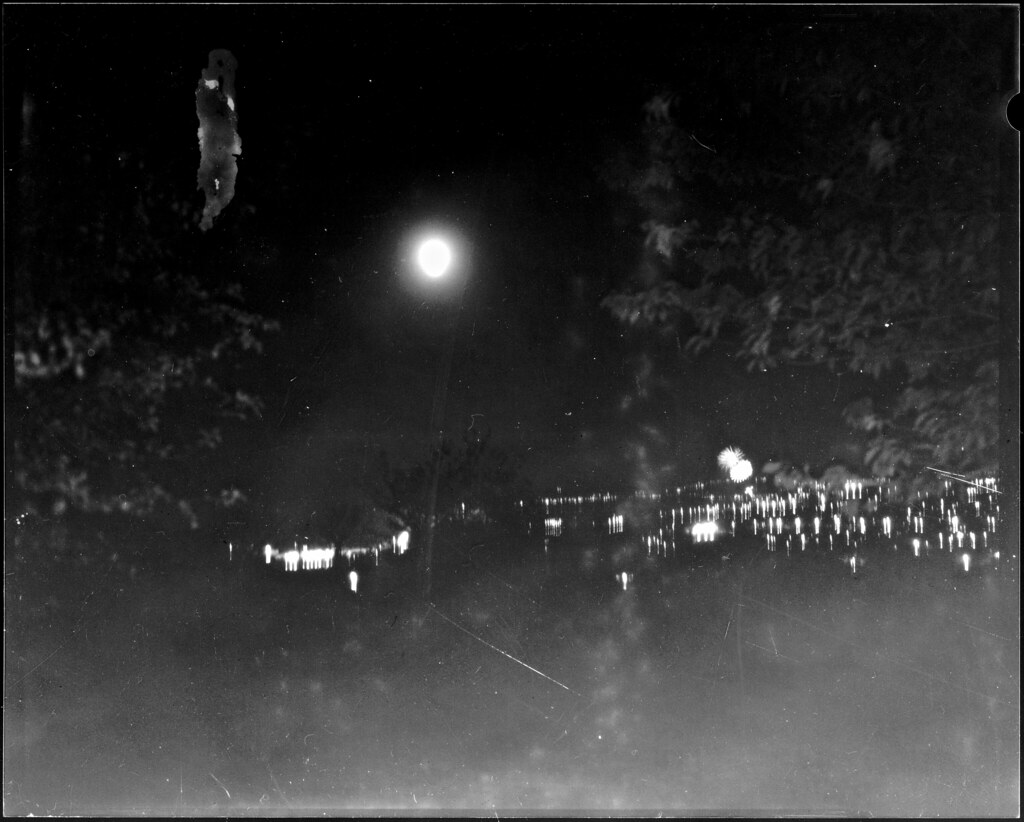 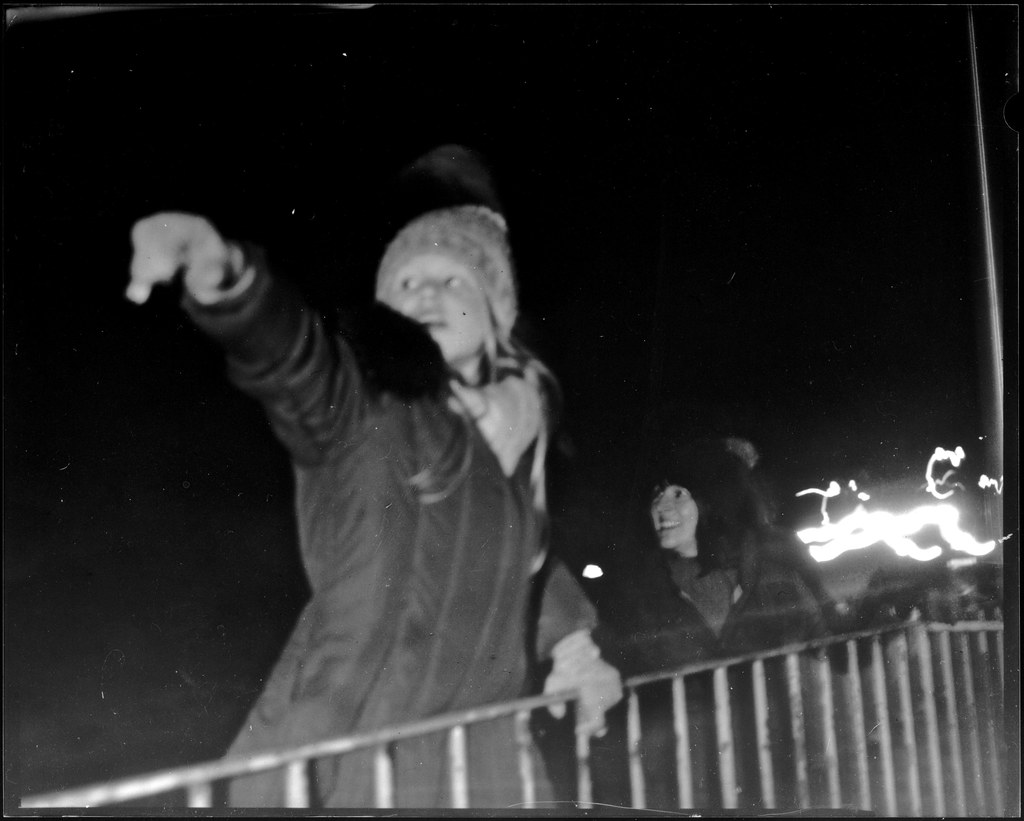 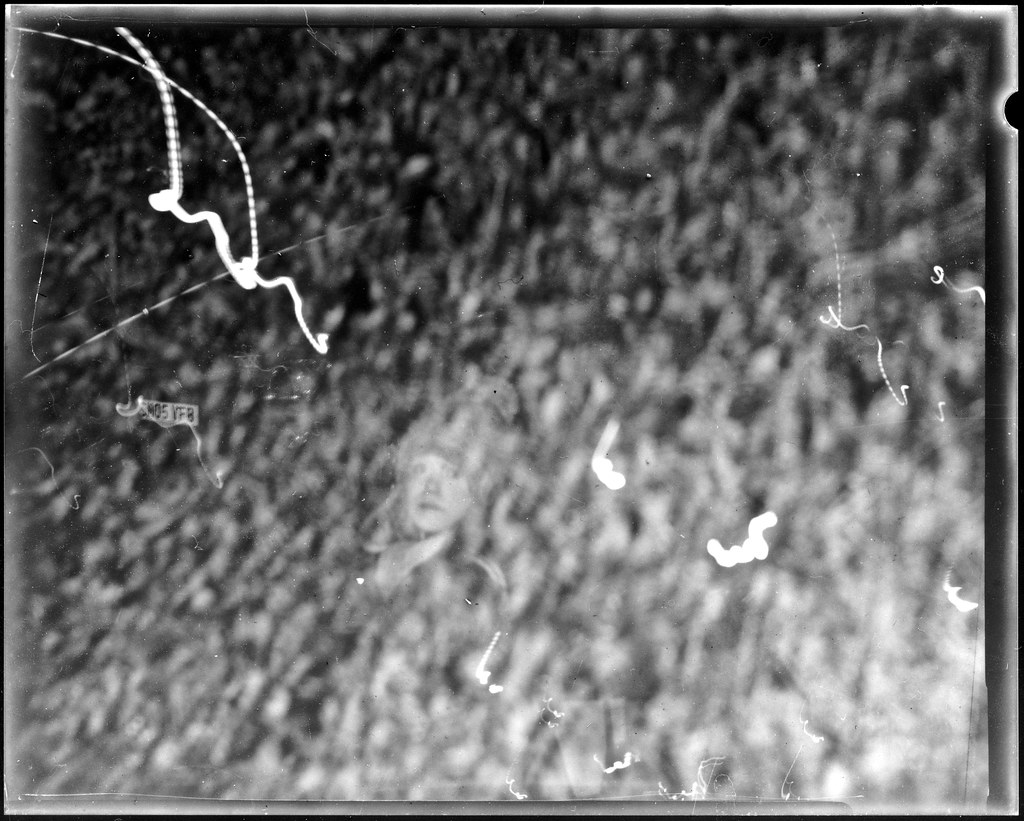 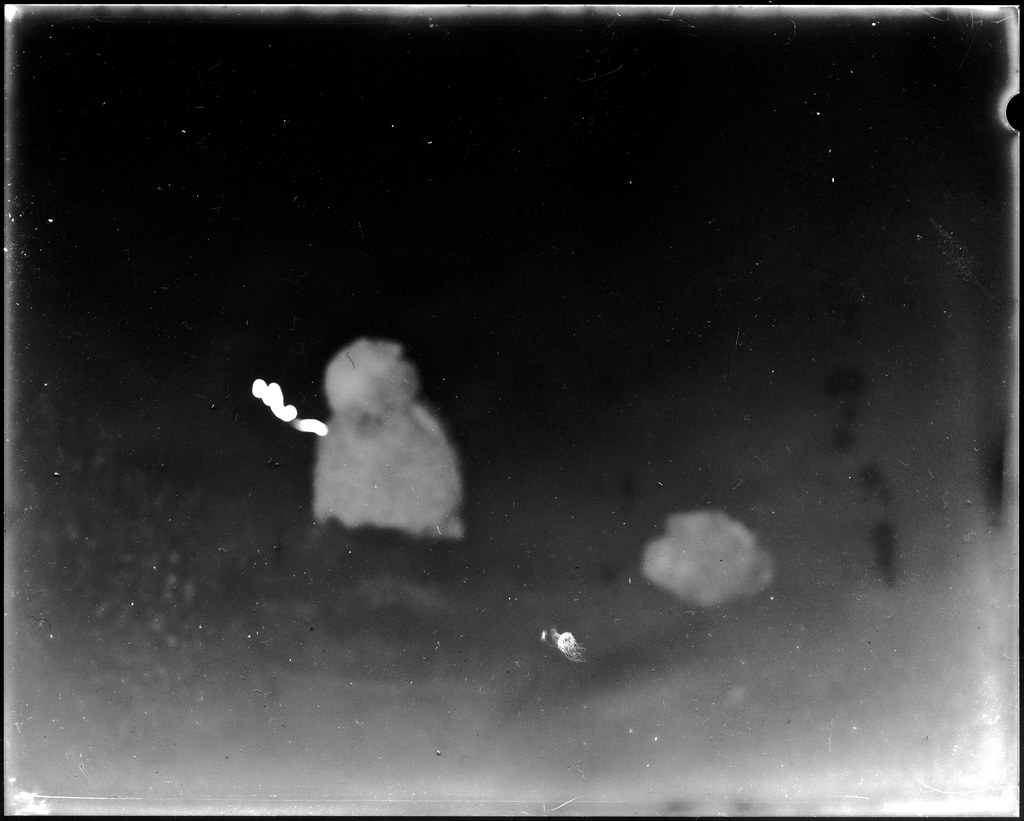 Conclusion
Clearly there is more to be done here. Hopefully I’ll have some opportunities to test shooting outside during the day this coming weekend (18th/19th November) and build a better picture of what this camera can do. I can’t help but feel there’s one hell of a learning curve waiting for me.

One thought on “Hand Held Crown”