So for my Daughters P2 Halloween Disco she wanted to go as a Minecraft Ocelot cat, an odd choice you may say but she was determined.

This Image from Deviant Art was my guide.

I had formulated a plan to build but before I could start constructing it I fell ill with tonsillitis, flu and a horrendous cough that lasted 3 weeks.

Through the heatwaves and mega-chills I drew up the plans for a suit but they were all in my fevered brain, when I started with the construction of the cat-head it was more like a ‘proof of concept’. From there I knew what I had to do; a full bodysuit made out of cardboard.

Here’s a gallery of photos from production to disco.

Concept/Construction
I really wanted to make a robot costume because of Anna’s love for the Beastie Boys’ ‘Intergalactic‘ track but she really wanted to be a Minecraft Ocelot as she’s Minecraft mental at the moment (read Stampy addicted), it’s also a similar enough build to a robot so if it went bad I could’ve just painted it grey and be-done. 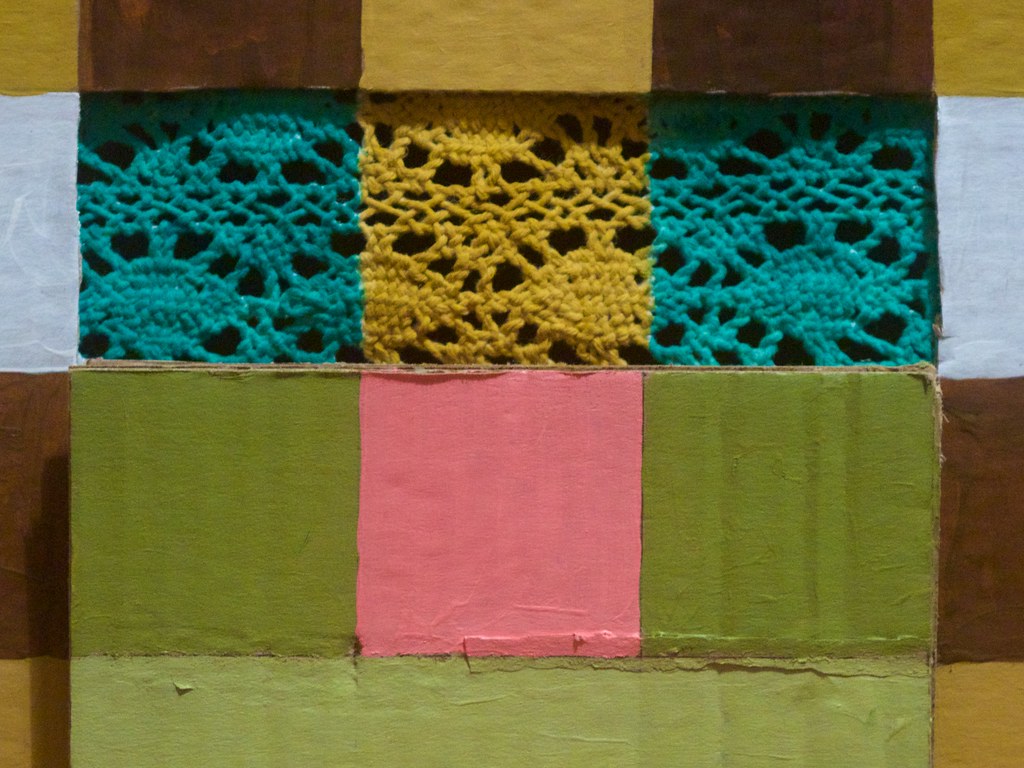 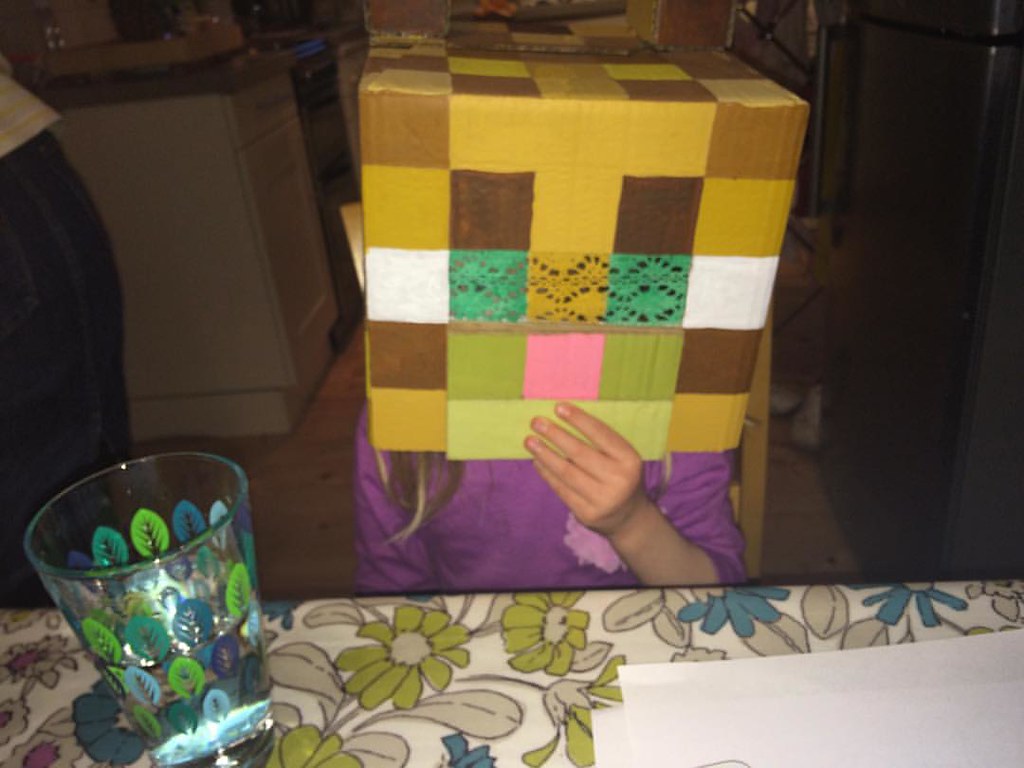 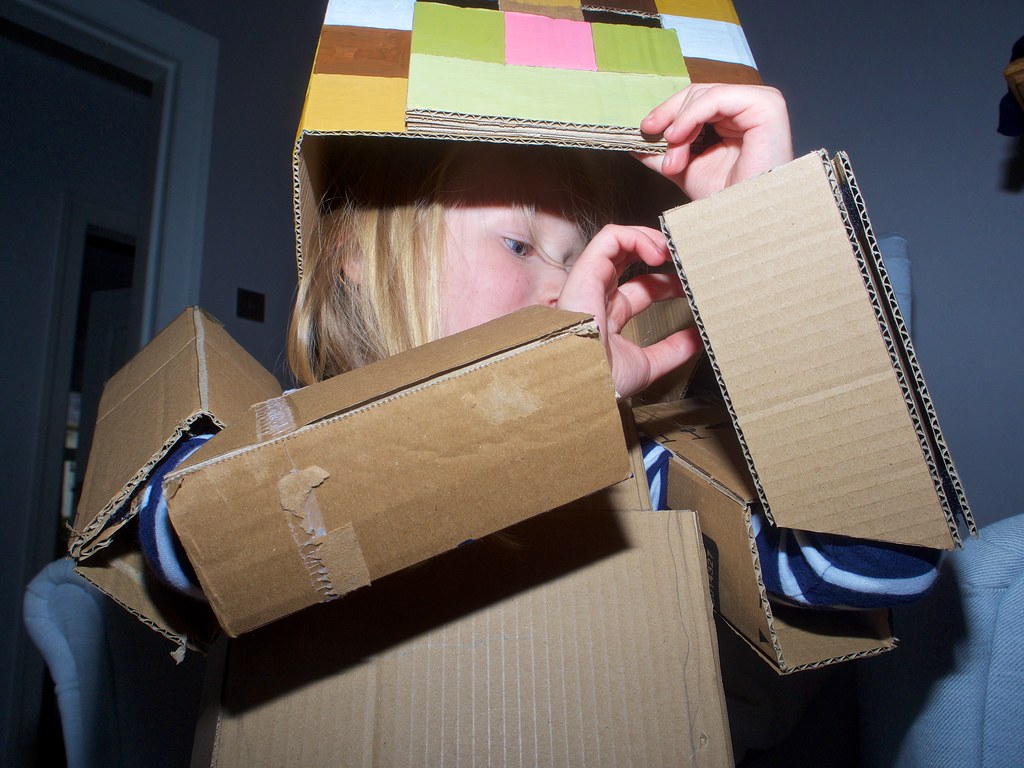 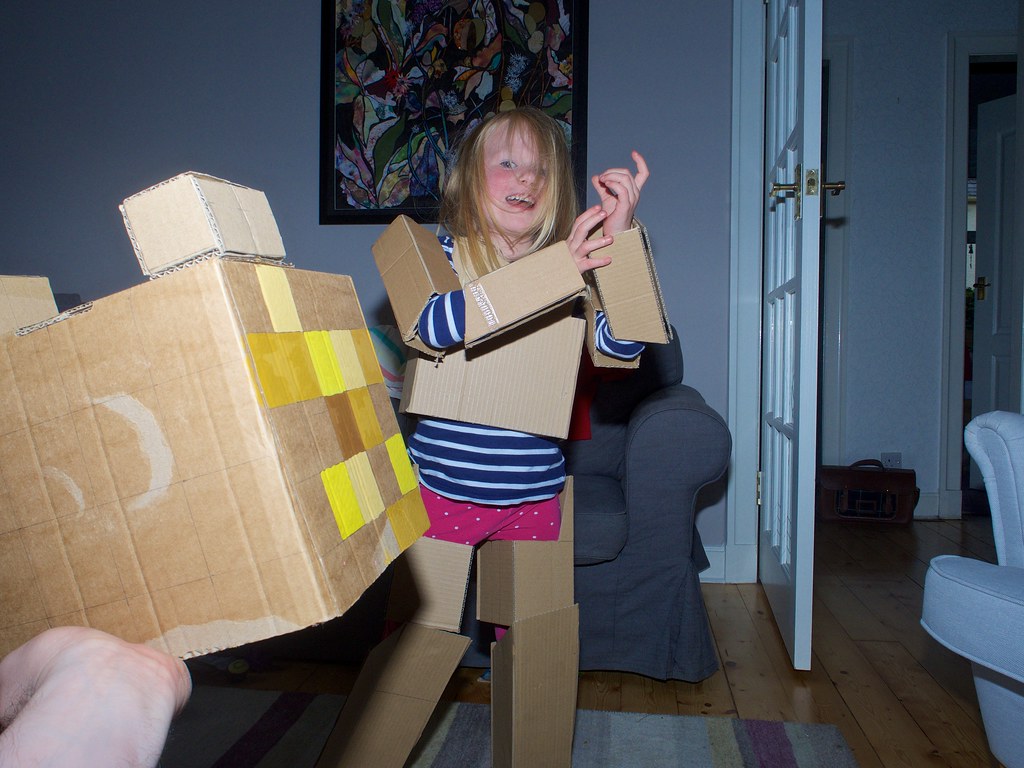 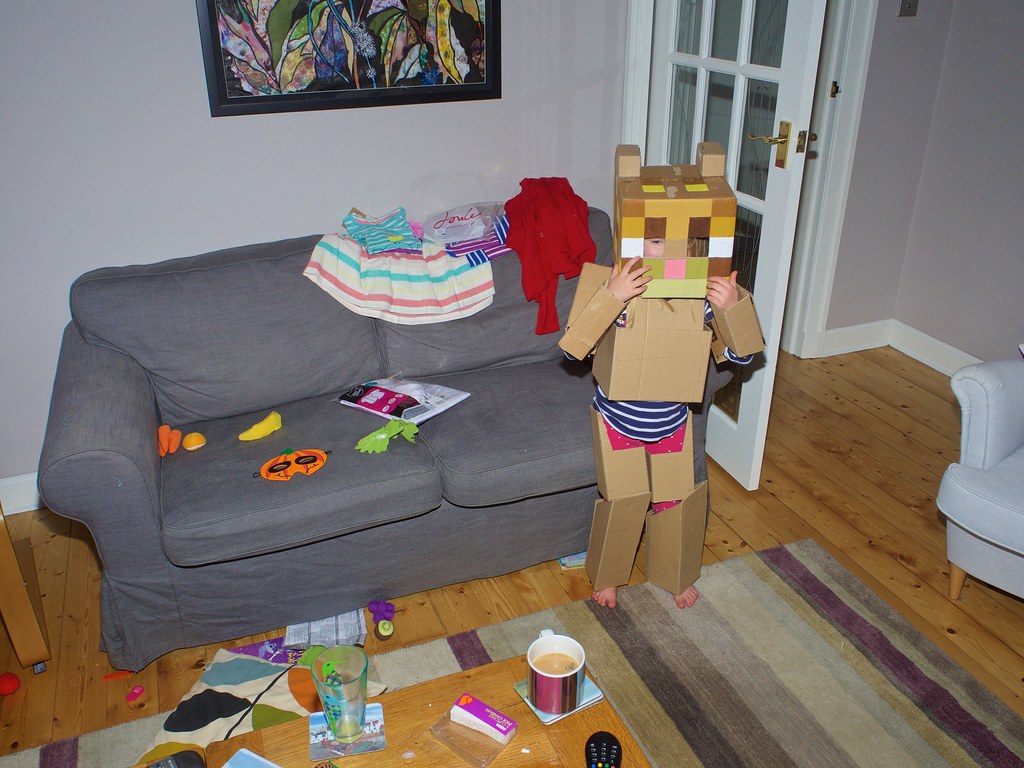 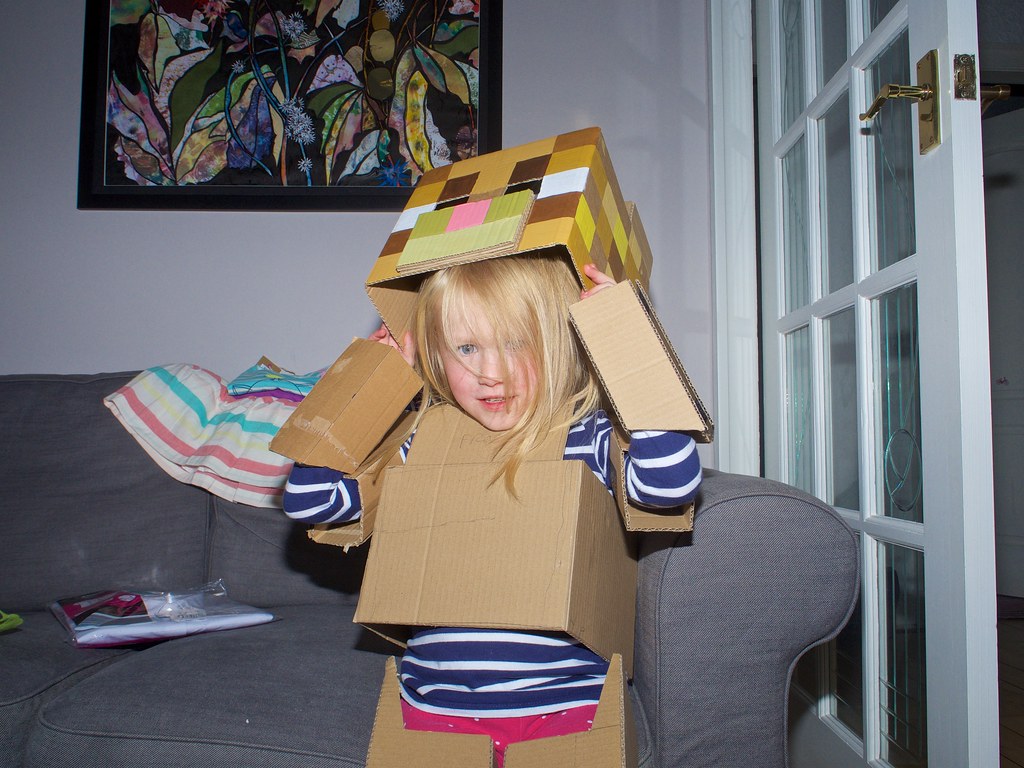 Painting
The pixel squares were 4.5cm squared for no reason other than it seemed like the right size. I didn’t want it to look professional because I knew I could never make it look so unless I spent even longer on it and included layers of varnish to flatten out the texture and make the colours ‘pop’. Instead I deliberately left a lot of squares unpainted to show the homemade aesthetic plus the brown box colour meant I didn’t need to fully paint all of the surfaces; the pink nose was artistic license. 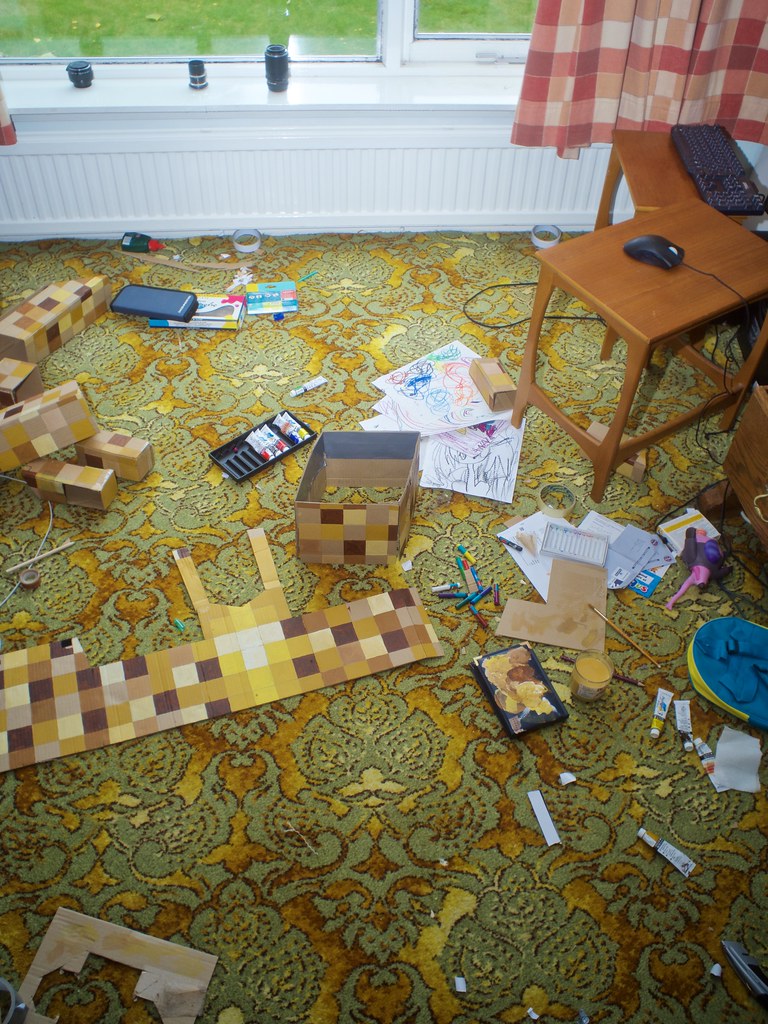 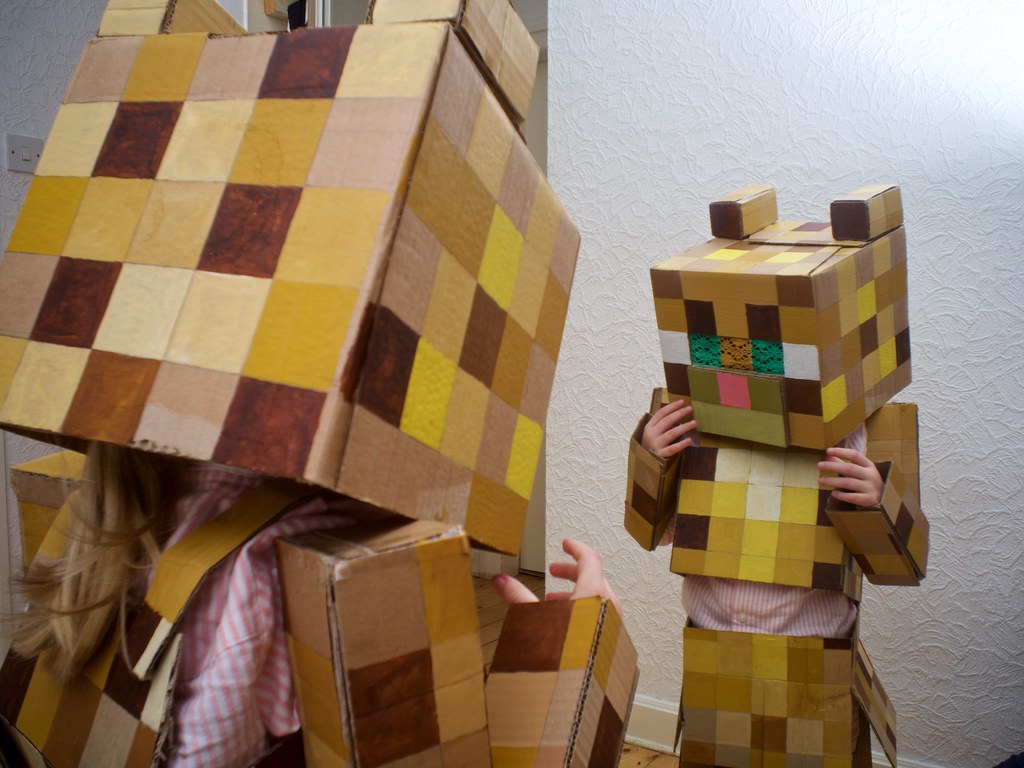 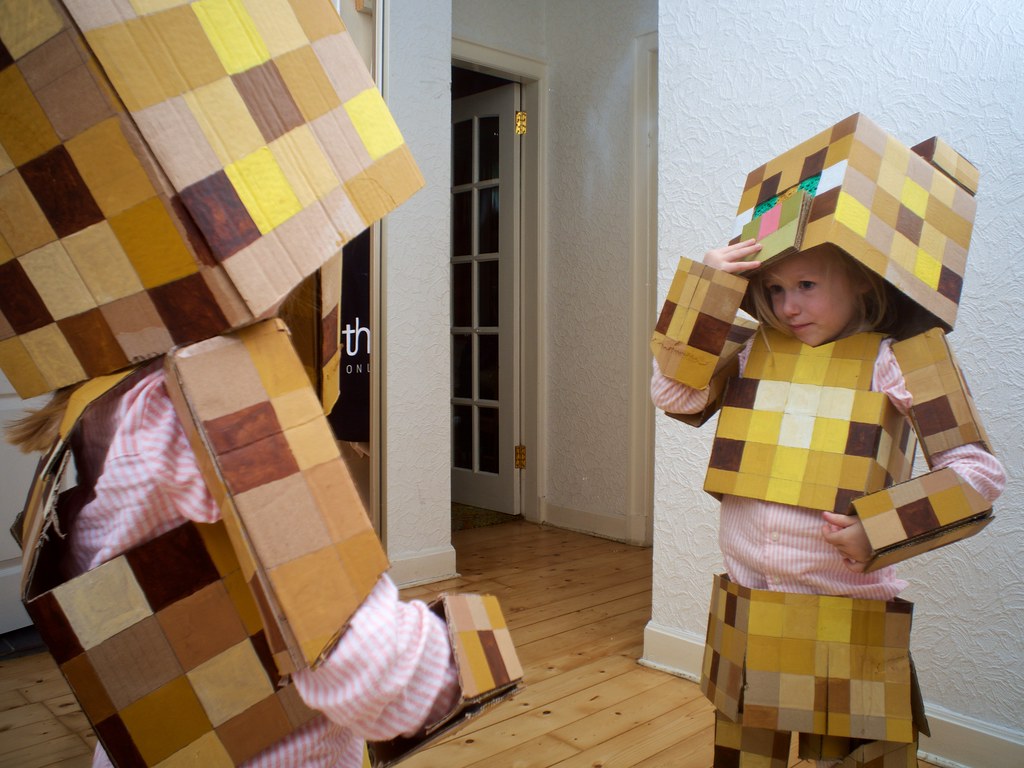 Disco Dancer
With the thigh and shin components in place some movements were quite restricted like bending down and walking long distances so we ended up pulling her along on a scooter to the disco.

The arm, leg and waist elements gripped to her under-clothes thanks to double sided sticky tape. Some tape is still stuck to her brown (th)Ugg boots to this day. 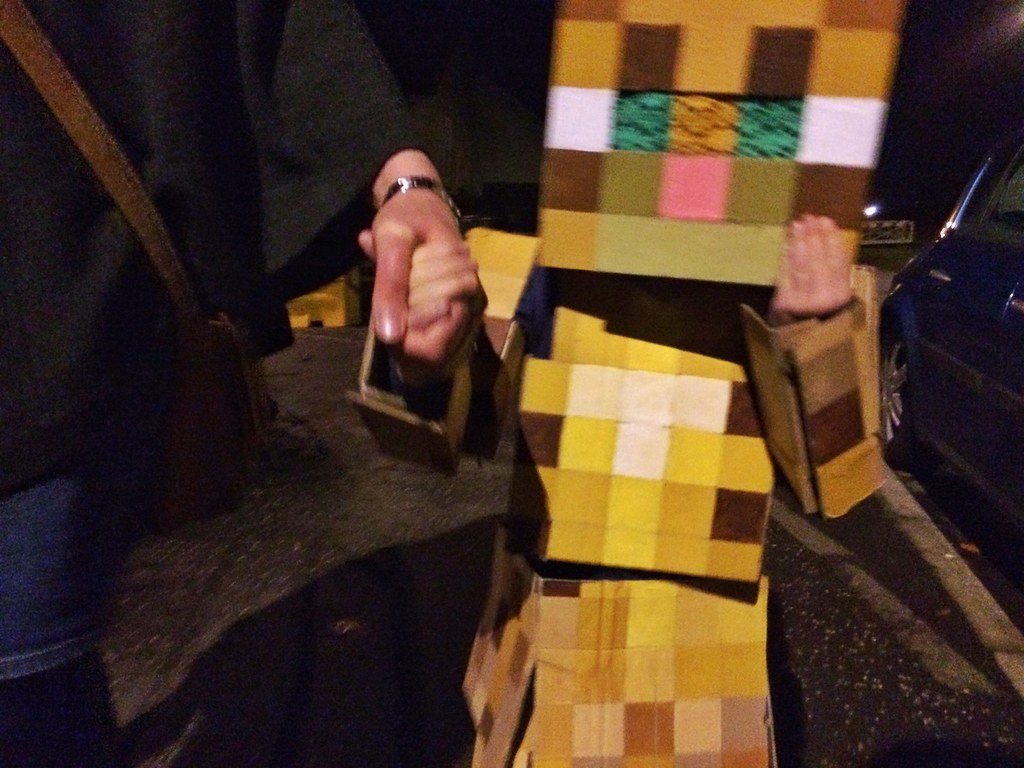 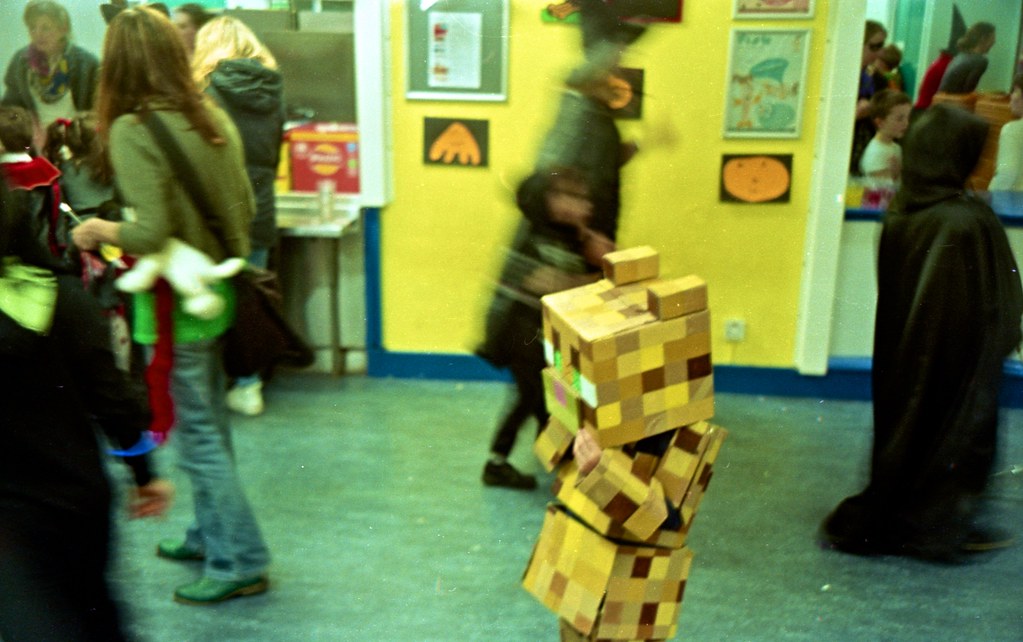 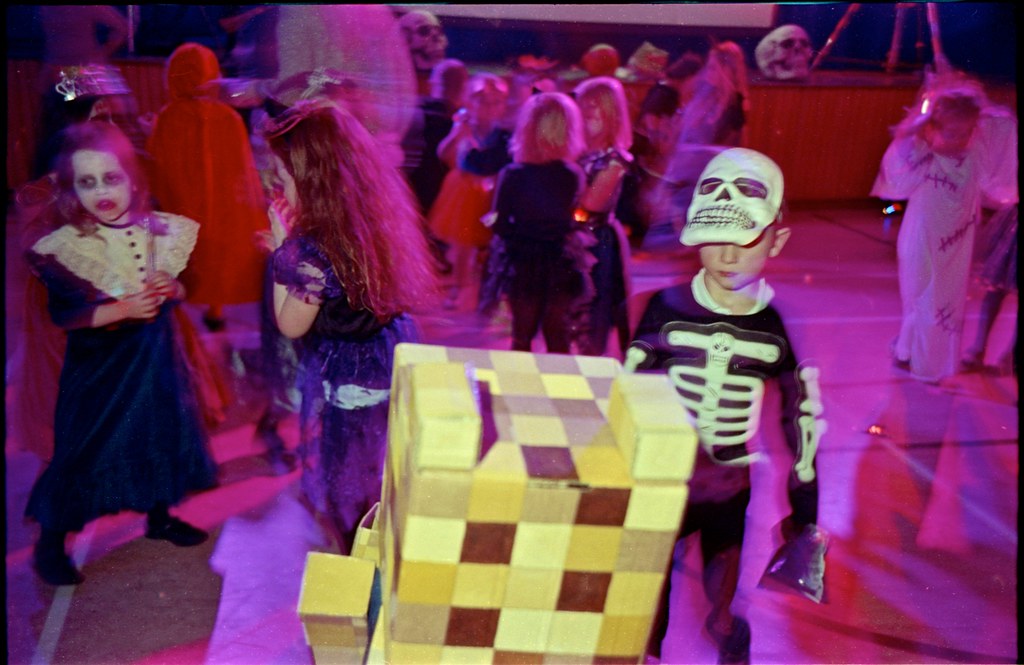 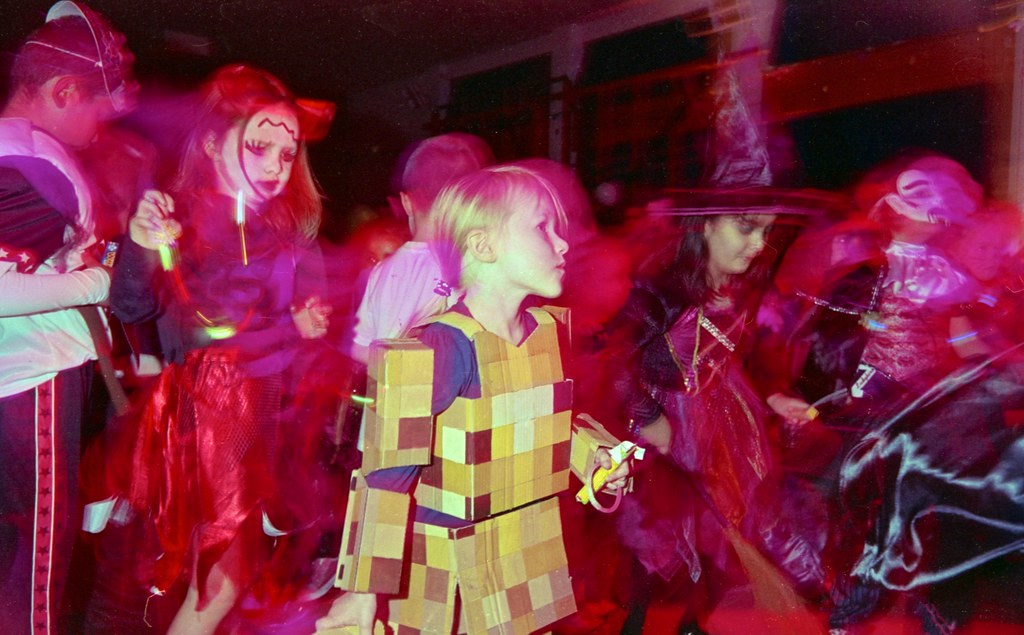 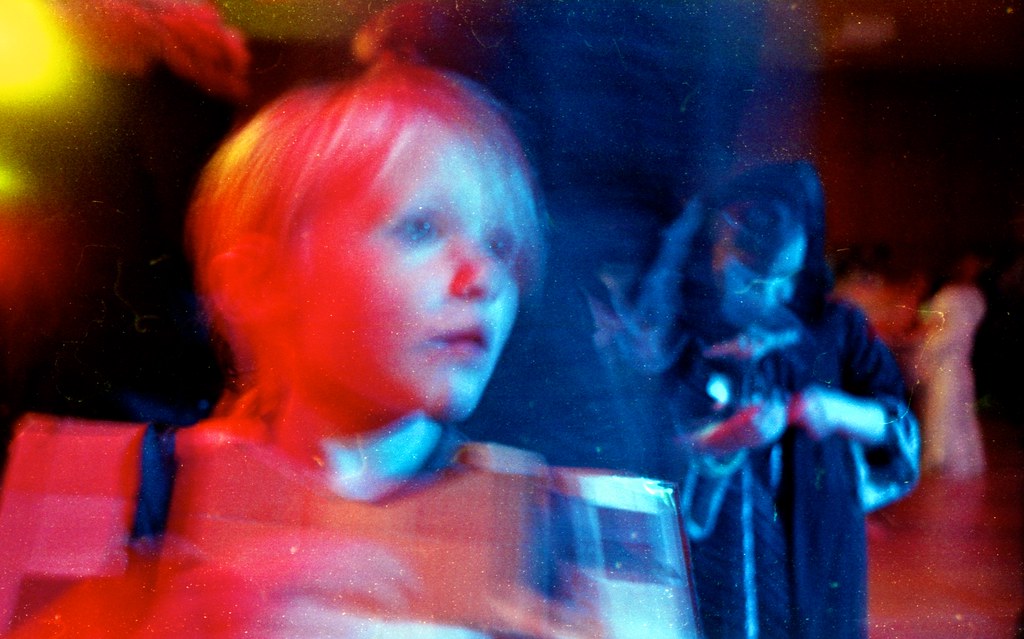 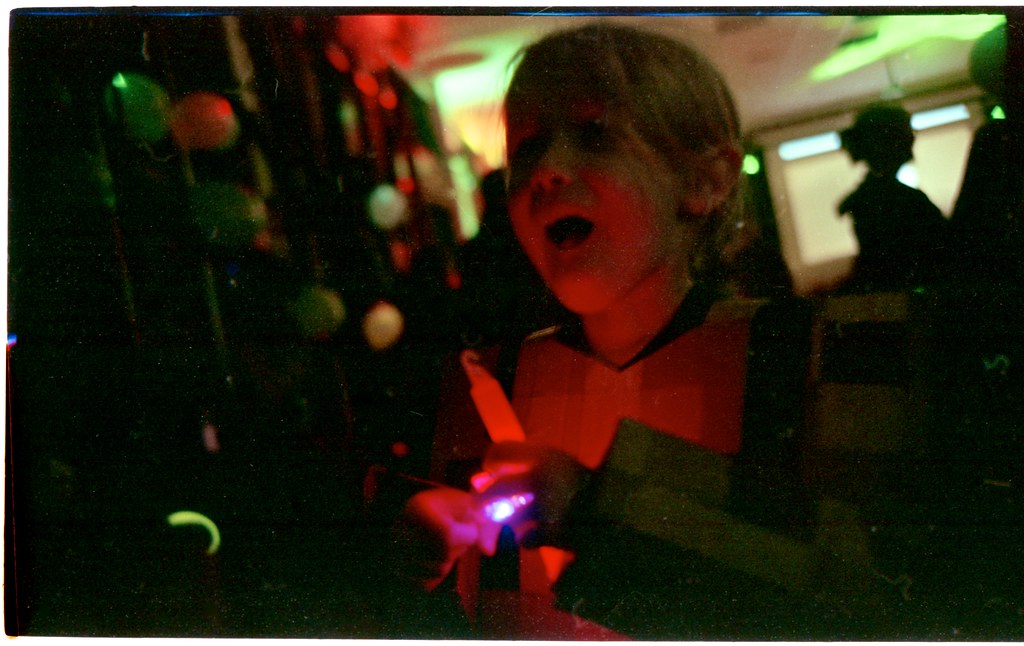 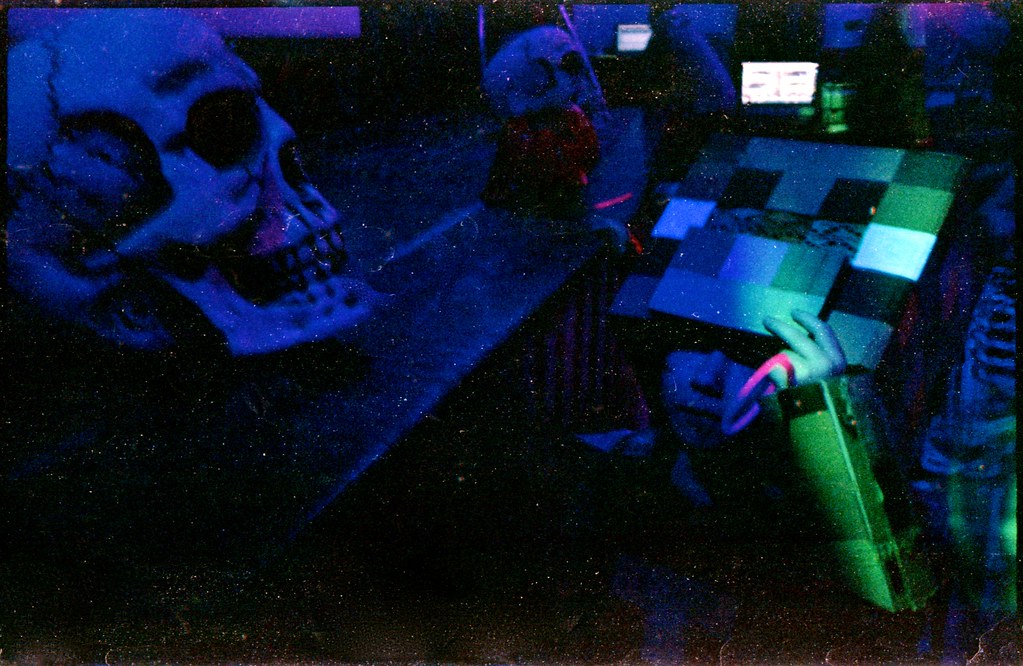 She wasn’t the only Minecraft inspired child, there was at least 2 Steve’s and one Creeper. Since Minecraft is super-popular with the kids in her school she got a few high-fives. 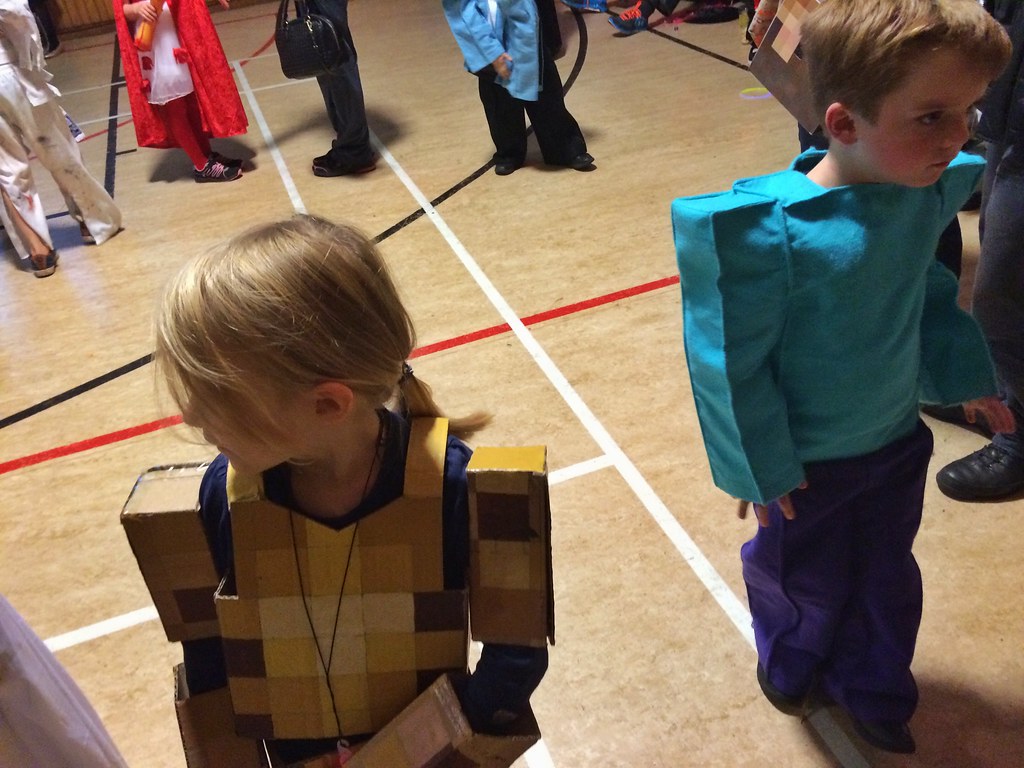 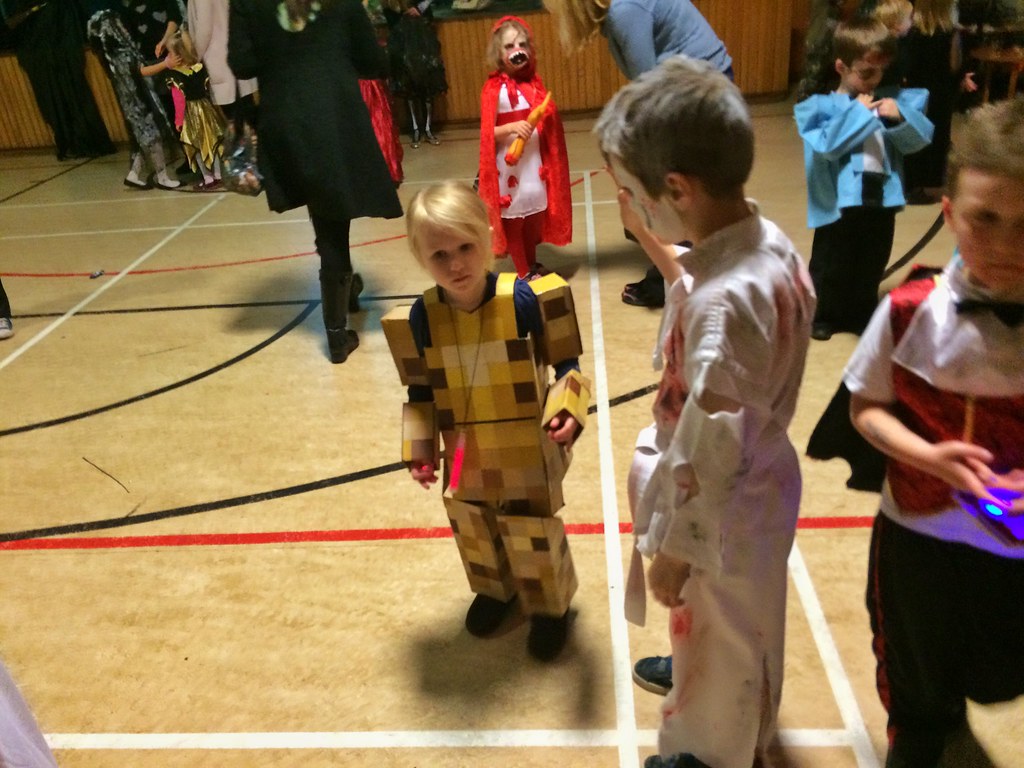 There was a small Halloween party the next day but she was a little over-dressed for it. 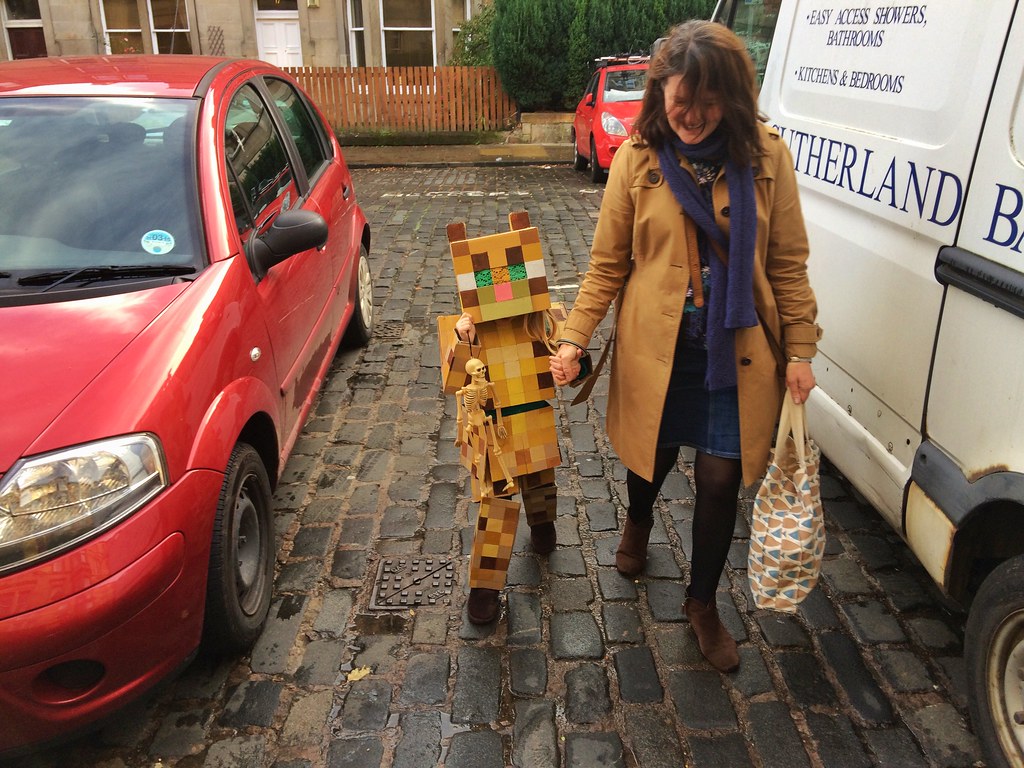 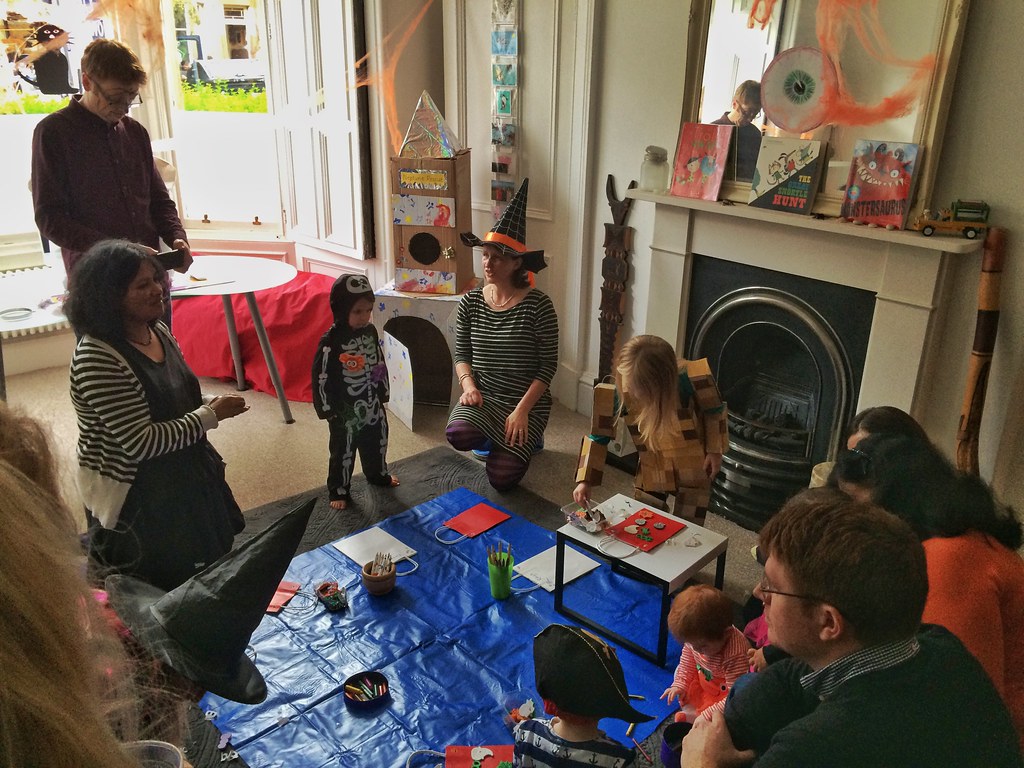 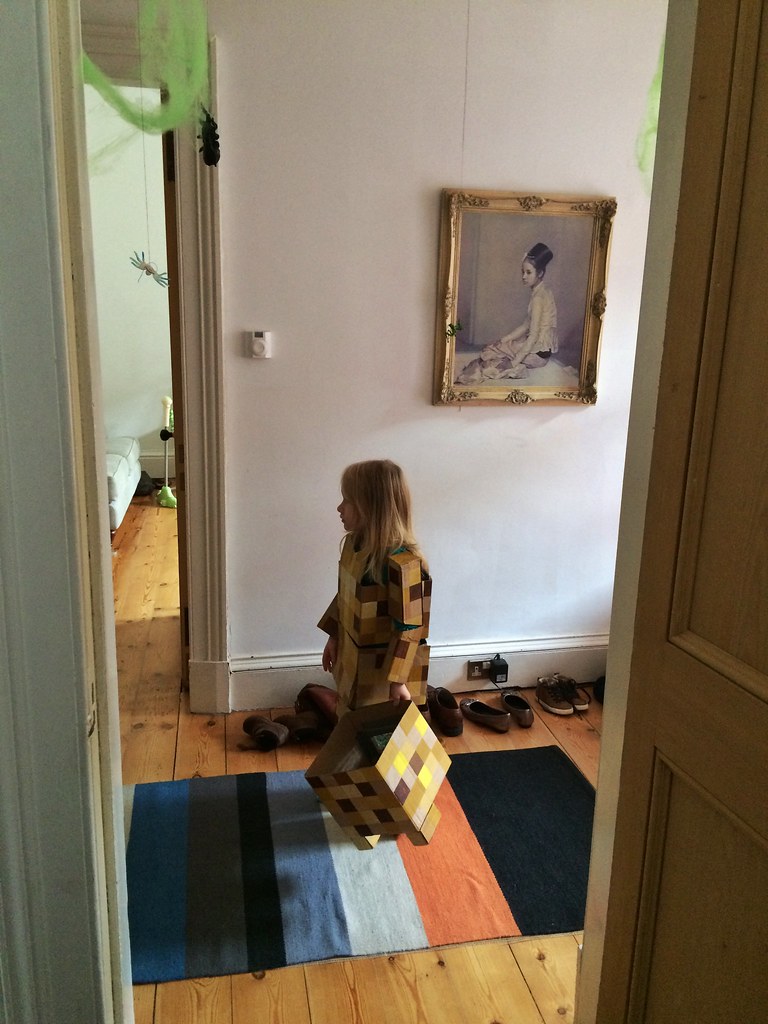